Graaff-Reinet is the oldest established town in the Eastern Cape and the fourth oldest in South Africa. During the seventeenth and eighteenth centuries Dutch Burghers began to leave the settlement around Cape Town and the authorities tried to keep up with them as they moved into the vast African interior.

These Burghers became known as Trek Boers and amongst other things were noted for their hardy independent character, a disdain for authority and their disagreements with the taxman.

In an effort to keep some control over their subjects, in 1786 the authorities established an administrative centre, or Drostdy, in a picturesque setting in the arid Great Karoo where the Sundays River flows from the Sneeuberg Mountains. This centre they named after the Governor of the Cape, and his wife Reinet.

In the 1830s there was a mass movement of Boers away from the Cape Colony to lands to the North, where the Boers hoped to establish Republics where they could be an independent people.

This was the Great Trek which had huge ramifications on the history of South Africa.

The vast majority of those who embarked on the Great Trek came from the Eastern Cape.

One of the Graaff-Reinet trekkers, Andries Pretorius, commanded the Boer forces at the Battle of Blood River and later became the first President of the South African Republic.

The capital of South Africa, Pretoria, was named after him. 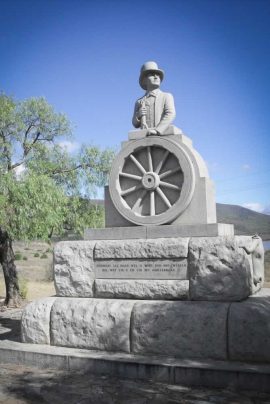 Starting at bedrock the story of the Great Karoo goes back 270 million years to when the central part of’ South Africa was a low-lying basin ringed by high lying land and covered by a thick mantle of slow-moving ice. With the coming of a warmer, wetter climate an enormously long period of alternating low and high rainfall seasons settled over South Africa.

This period saw the development of a luxurious plant life and the appearance of now long-extinct animals. With the passing of millions of years sand, mud and clay, often containing the fossil remains of animals and plants, were pressed and hardened into a series of rock layers, or strata, thousands of metres thick. The countryside formed from these deposits is today known in the Cape as The Karoo, while the series as a whole is known to geologists as the Karoo System.

This, in turn, is divided into several series that are, from oldest to youngest, the Dwyka, the Ecca, the Beaufort and the Stormberg series.

It is from the beds of these younger geological series that have come fascinating fossils, leading to the Karoo’s recognition as one of the worlds largest and most important fossil deposits.

Painstaking pre-historical detective work undertaken by such famed “fossickers” as the late Dr Robert Broom has vividly re-populated the dim distant Karoo with the grim and grotesque monsters which lumbered, grazed and fought in its primaeval marshlands and rivers; animals such as the Pareiasaurus, a fearsome-looking cross between hippopotamus and crocodile, preyed upon by the even more hideous titanosuchids, therocephalians and the gorgonopsians.

It is strange today to think of the Karoo’s lonely landscape echoing with the shrieks and bellows of battling dinosaurs and even stranger to realise that whilst these scaly monsters were fighting for supremacy a new type of animal, no larger than a rat, had appeared on the Karoo scene to announce the beginning of the first true mammals.

The Karoo’s evolutionary scenario had a dramatic curtain when the semi-desert habitat experienced cataclysmic volcanic eruptions, pouring vast rivers of molten lava over the countryside, destroying all animal and plant life. At the end of this volcanic activity a period of erosion began, gradually stripping away land surfaces to expose the entire Karoo succession – a petrified showcase of entombed plants and animals, in a process that is still taking place.

Graaff-Reinet is the main center of the Camdeboo Municipality (Population in 2002 44 354), and is built on an area known as “the horseshoe” where the Sundays River makes a loop almost encirclling the old town.

Few towns have conserved their historic townscape as well as Graaff-Reinet, with the result that the town has more protected buildings than any other in South Africa.

The most prominent of these is the Dutch Reformed Church which is a Victorian gothic gem. Other notable structures are the Old Drostdy, which is now the Drostdy Hotel, as well as several buildings which are splendid examples of the Cape Dutch idiom, such as Reinet House, Urquhart House and the old Residency which now are part of the Graaff-Reinet Museum.

Graaff Reinet has always been a political centre in South Africa and since the days of the “Graaff-Reinet Republic” has remained in the forefront of the historical processes in South Africa. During the Second Anglo Boer War, during the guerrilla phase, raiders from the Transvaal and the Free State operated widely in the rugged terrain of the area, supported by much of the Afrikaans speaking populace.

Many of these people, although officially subjects of the Queen, took up arms and joined the Boers. They were known as the “Cape Rebels”. A large military garrison was stationed in Graaf Reinet in order to try and quell the situation. To read more about Graaff-Reinet and the Second Anglo-Boer War (1899-1902) visit the website of The South African Military History Society here.

The barracks where they were stationed still exists and is now known as the “Royal Walk” and is part of the suburb uMasizakhe. Many of the Cape Rebels were taken prisoner and were charged with high treason. A number were shot by firing squad, the most famous and controversial being Gideon Scheepers, a Boer commander who was executed outside the town near the Van Rynevelds Pass. When the Van Rynevelds Dam was built his grave was covered by waters of the resultant lake.

Dr. Robert Sobukwe one of South Africa’s most famous and tenacious anti-apartheid activists hailed from Graaff-Reinet. He is best known for founding the Pan African Congress and was imprisoned on Robben Island for many years. When he had served out his sentence a special act was rushed through the South African Parliament to keep him on the island, the only time in South Africa’s history that a piece of legislation has been passed with one person in mind. Dr Sobukwe is buried in Graaff-Reinet.

Graaff-Reinet is almost entirely surrounded by the Camdeboo National Park which covers the surrounding mountains.

In this reserve is also to be found one of South Africa’s best known geological features, the Valley of Desolation, a dramatic cleft in the ironstone rocks.

Graaff-Reinet is also at the centre of a large area of private game reserves and hunting lodges and is the centre of a sheep farming area that has become well-known for the quality of it’s wool and mutton, indeed Karoo Lamb has become famous as being the finest in the world.